SME sector in India stands at a crucial juncture today. The direction entrepreneurs and business owners take over next few years will not just define their fate, but will have a much larger bearing on India’s role in the global economy.

German Mittelstand find a special mention in any discussion around SMEs. Everyone from Britain to India want to emulate their model. Mittelstand is the name for German small and medium enterprises. Pride of Germany, envy of Europe, Mittelstand consists of more than 99% of total companies in Germany and generate 60% of their total jobs. With a strong exports model, they have been giving Germany a problem of plenty of late with continued current account surplus over years which has attracted sharp reactions from other members of European Union.

Majority of Mittelstand are family owned. Similar to Indian SME sector, there is no separation of ownership and control. Ranging from a one employee company to 500 employee enterprise, they are very diverse and managed by the owners themselves. These family owned companies have passed on from one generation to another over the years. They mostly use loans and retained earnings as form of investment to maintain the owner’s control. The similarities more or less end here.

Majority of Mittelstand are family owned. Similar to Indian SME sector, there is no separation of ownership and control. . These family owned companies have passed on from one generation to another over the years.

The SME sector in India contributes nearly 8% of the total GDP while In Germany, Mittelstand account for nearly 52% of the GDP. So why is that Indian companies have not tasted similar success even after a model very similar to the German Mittelstand. Answer lies in mindset.

Mittelstand are champions of innovation. They keep on tinkering with products based on customer feedback and research and are able to bring new technologies/products to market almost on a continuous basis. When the world was busy cutting jobs and reducing spend on research and development during the last financial crisis, Mittelstand were increasing it. This speaks volumes about the mindset of these companies. A huge and highly regarded network of research institutions and universities work closely with Mittelstand to maintain their innovation superiority. They come up with large number of practical and industry ready research projects on contract basis for Mittelstand who use them to develop innovative products.

Almost half of these companies export their products to global markets. Even small companies don’t shy away from having a global footprint and hugely benefit from it. Mittelstand are a big brand in global markets now owing to their products which feature latest in cutting edge technology. Instead of being obsessive about large companies like their counterparts in India, they often partner them to offer their distinct products.

The major advantage of skilled manpower that Mittelstand have been able to create is due to the German apprenticeship system. More than half of German workforce receive quality training in the Mittelstands and are readily employable unlike India where over 90% of college graduates are unemployable. They value their relationship with their employees and always have a long term outlook.

As part of Make In India Mittelstand (MIIM) project, The Indian embassy in Germany is helping Mittelstand companies to make a foray in India. Global leaders in Innovation are now setting up shop in India to take advantage of the lower cost of capital which the Indian SMEs already enjoy but have not been able to fully exploit. With a change in mindset, there is nothing which Indian SMEs can’t achieve which their German counterparts have.

Learning from success of Chinese firms

It is also important to understand why India couldn’t replicate the success which Chinese firms were able to achieve in last few decades. While many rightly point out to the state support to the Chinese industry and a comparative lacklustre attitude on the other side of the border in the last 60 years or so, this is not the entire story.

A deeper analysis throws some interesting points. While the Chinese players were bold enough to think about competing globally with the gradual opening up of their economy some 3 decades back, Indian entrepreneurs were content with operating within their comfort zones and thinking about making most of every possible economic opportunity which came their way rather than following a good strategy. While the Chinese started thinking about quality improvements, bringing in professionalism and devising good business strategies, their counterparts on the other side still believed that these elements are best left to the multinationals or bigger companies and had nothing to do with them.

A very good example is that of Haier. With 14% of global market share in white goods segment, Haier needs no introduction and competes with brands like GE, Samsung, Bosch & Electrolux. Not long ago though, company was in dire financial state & on the verge of bankruptcy.

In the mid 80s when China was in process of opening up its economy, a refrigerator factory which later became part of the Haier group was producing around 80 refrigerator units per month and was able to sell almost the entire stock. The quality of these refrigerators however was poor. The Chinese middle class wasn’t very affluent at that point of time and it wasn’t tough to sell the entire stock including the defective units.

Once a customer complained about a faulty refrigerator to their CEO Zhang Ruimin & he ordered his staff to find a replacement for the faulty unit. The factory staff reported back to Zhang after looking through the entire stock of 400 refrigerator units and told him that 20% of them were defective.

Zhang knew he had to do something about the situation. He was aware that the Chinese middle class was poised to grow and so was the disposable income available with them. “With an increase in income, they will no longer tolerate defective products” he thought.

He ordered his staff to line up all 75 defective units on the factory floor. He then brought a sledgehammer and smashed every single one of those units in full view of the general public and factory staff.

He had made his point. He announced to his staff that from then on, every single refrigerator going out of the factory floor had to be of the finest quality with zero defects.

To ramp up his capability and implement the quality focused strategy, he entered into an agreement with a German company Liebherr. That was a turning point for the local factory, which went on to acquire many more local units producing refrigerators and air conditioners. That sledgehammer is now on display in the national museum in Beijing and is called Hammer of Quality.

Zhang could have easily sold those defective units which would have been enough to pay for the annual salary of his combined factory staff at a time when he was borrowing money to pay them. However, his farsighted vision placed Haier on the path to become a global force to reckon with.

It’s not just lack of vision but also a lack of strategy which has restricted the SME sector from unleashing it’s full potential. As simple it may sound, this is exactly what most of the small & medium enterprises lack. A strategy. While organizations may have a different conception of what a good strategy looks like, most of them simply don’t have one.

People often misinterpret vison or goals as strategy. To be the best, to be the biggest or setting annual profitability targets are not what you call a strategy. They are mere goals which will need a good strategy to be achieved. Strategy today is one of the most muddled concepts. With multiple theories going around, it’s very easy to be lost in the actual interpretation. 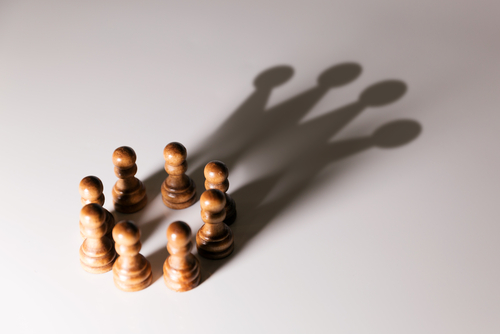 A strategy has to strike a careful balance between ambition and implementation and needs to be grounded in operational reality. Instead of trying to make the most of every opportunity and blindly perusing growth, companies should focus on developing or improving a unique set of capabilities which help them differentiate themselves from the competition. Something they can do best. A strategy built on a set of distinctive capabilities complimenting each other gives organizations an edge. It is using these capabilities that a company develops a distinctive personality. It’s no coincidence that all three elements are linked together.

However, the capability to weave through a mix of these elements may not be available in- house for the SME sector. While an entrepreneur or a small business owner will know his trade better than anyone else, he lacks a professional team to help manage big transformations. A little external help from a partner who can understand his needs and helps manage the change making sure that the owner or the leadership team is not overwhelmed by the responsibilities and decisions which comes with such transformation can go a long way.

The problem has been a reluctance of SMEs and small business owners to engage these consultants. Rightly so as the consultancy players operating at the top of the pyramid are less concerned about catering to this segment and even when they do, the costs involved in getting them on board are extremely high. The economic loss incurred to the SME sector in absence of expert and professional services in terms of strategy, change management & project management services is too high. Eventually it ends up costing them more in terms of missed opportunities. It is to fill this space that Bombay Center for business and strategy has positioned itself as partners in growth of the SME sector. We come with a global perspective and deep rooted corporate ethics and professionalism while being aware of the culture and ground realities prevalent in the SME space. The time and climate couldn’t have been better for such a partnership.